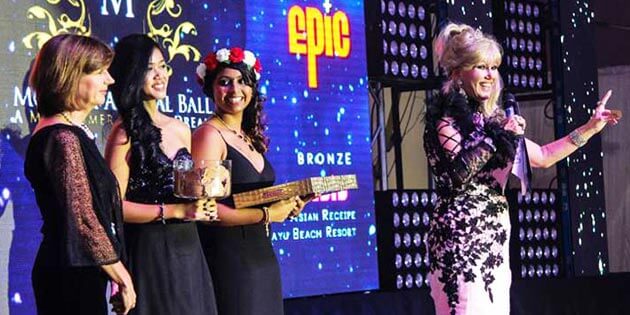 Master of Ceremonies for the Monash Ball

How can I, as the master of ceremonies, describe this night?

An Enchanted Evening With Master of Ceremonies, Donna Daniels

Only as a real Shakespearean fantasy night. The ballroom decorations were breath-taking, with a surreal tunnel entrance, to enchanted trees that glistened & glittered in the room. The lights….spectacular, the set-up……amazing,  the sound……impressive. Yes, a lot of people had worked very hard to put this event together. I was enthralled & I spent a long time taking it all in. I felt I was in a very special, unique, medieval setting. Naturally the audience also felt that way, as camera were whisked out at every opportunity, and many ‘selfies’ were taken. 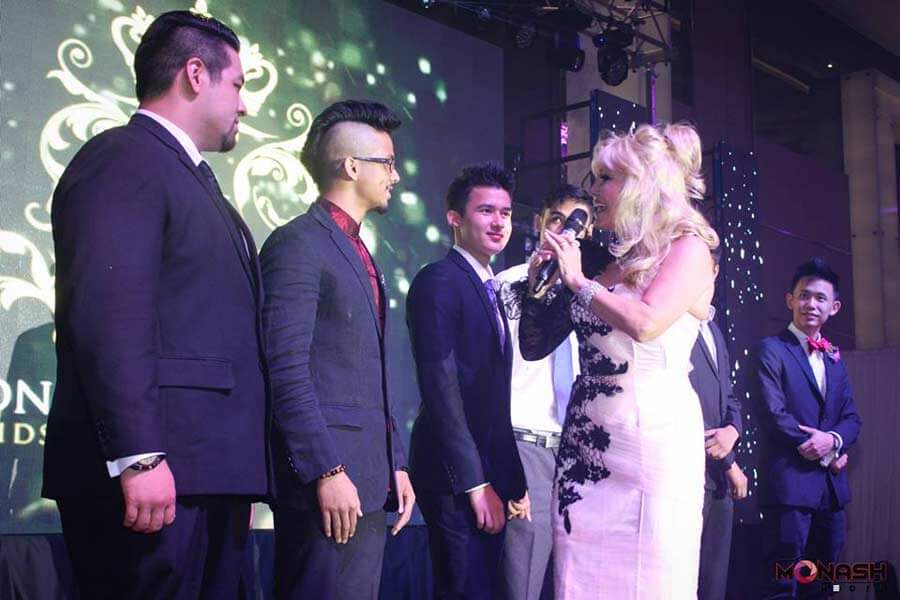 CAN I READ SHAKESPEARE?

Once in a while, I am asked to recite a specific quote that is suitable for the event, & tonight I, as master of ceremonies, became a Shakespearean actress. This was what the Monash Ball organising committee asked me to say:

“A night of mystery, wonder, love, lust and romance. The eye of man hath not heard, the ear of man hath not seen, man’s hand is not able to taste, his tongue to conceive, nor his heart to report, what senses one could devour. For one night, you will come alive we promise. Because A Midsummer Night’s Dream is where our heart meet in a garden of envy.  After all, the course of true love never did run smooth.”

Well, it seems, that – Yes, I can recite Shakespeare & in fact, I enjoyed this snippet so much, because it really led me to understand the whole feel of the event. For one night, we would make the audience come alive & their senses would be stirred & devoured. It was to be a night of wonder, love & romance. That was my role as the master of ceremonies female, to make sure that the audience understood their part in this mysterious Shakespearean theme. 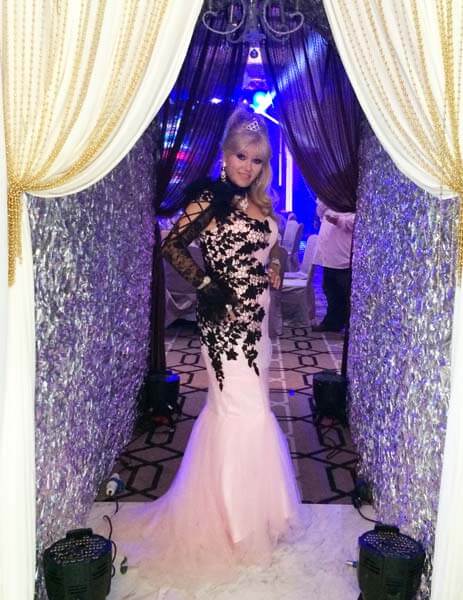 BRING TO LIFE THE MYSTERY, FANTASY AND WONDER

The ballroom was filled to overflowing, with VIP’s, Invited Guests, Sponsors, Lecturers, Teachers & Students all full of anticipation and wonder. Myself, as the master of ceremony could feel the excitement in the room, & after all the formalities were over, the night kicked off to a wonderful start with a performance by Josh & Keith. These two guys were runner’s up in the Monash Got Talent competition, and I was very impressed by their talent.

Then it was time for bewilderment & wonder, as one lucky guest walked away with one of only three lucky draw prizes for the night. Sheer wonder, indeed!

Not only am I the master of ceremonies, but I am also a singer and a games mistress for this enchanting evening, so it was time for me to add to the love that the night was feeling as I sang ‘Feel This Moment’ to the audience. 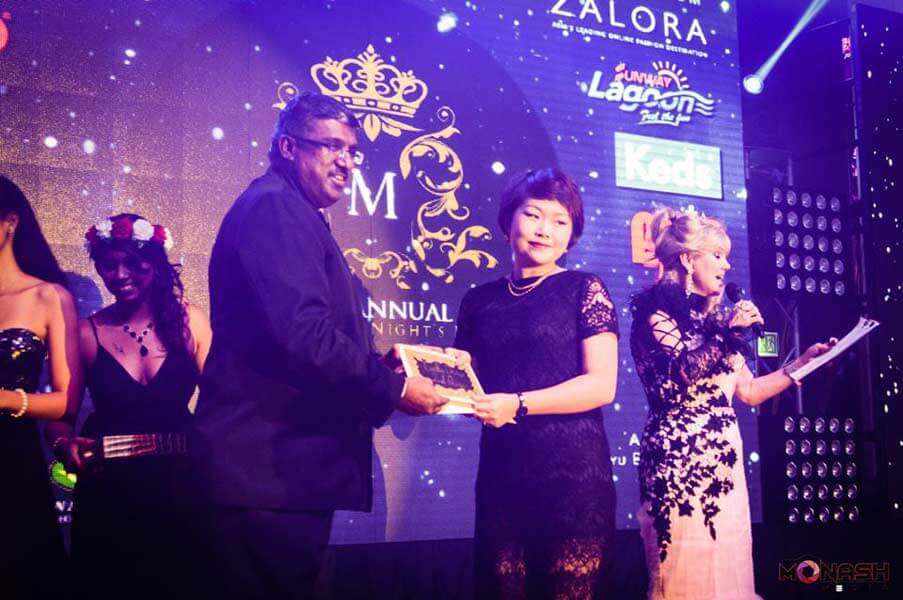 A NIGHT TO REJUVENATE THE SENSES

As a master of ceremonies, it is a rare occasion indeed when there is more than one or two performers on the program. However, this night was not like any other. Tonight, there were five  acts on the bill, and to rejuvenate the senses of the audience, I welcomed, as master of ceremony, a very enthusiastic group called the Rejuvenate Dance Crew. They enthralled the crowd with their hip hop dance moves & certainly energized everyone in the audience.

I was so impressed with their dance moves, I decided to invite some guys from the audience to try a few ‘moves’ with my dancers. I asked for 5, and I think 40 or more volunteers came up! Definitely a very enthusiastic audience.

Next it was time for me to give away one more of those very precious lucky draw prizes. No doubt the winner was beyond happy.

Our next performer was a man of humour, who tickled the funny bone of all those present. He was none other than Malaysia’s home grown comedian Andrew Netto.

Again, it was time to move on to the top lucky draw.

I could feel, as the Master of Ceremonies, that the excitement was building, because the highlight event of the evening – the crowning of the new Mr & Ms Monash was approaching. This was a highly anticipated part of the night, as the students vote counted for 60% and the judges vote for the finalists was 40%. The students votes had already been calculated, I could see that a lot was riding on the performances of the finalist for the night.

The anticipation was building, but there was still another performance, and that was by Malaysia’s very own “Havoc Girl” also known as the “Girl from Youtube”. Her performance was lovely and just right to lead us into the question on everyone’s lips….Who will be the new Mr & Ms Monash?

There were 6 finalists – 3 guys & 3 girls, and they did an excellent job of fitting into the romantic theme. A guy & a girl were paired together & they whisked & twirled their way through the crowd to come before the judges, then the gentlemen escorted their gorgeous ladies onto the stage and into the limelight.

As master of ceremony I was then given the task to let the girl tell the audience why she would be a good representative as Ms Monash & also answer a special question that was designed to catch her off guard. This definitely showcased their ability to think on their feet.

Then the guy was given the same chance. As the master of ceremony, I asked him why he felt he would be a great representative as Mr Monash & also, a similar question that was designed to catch the guys off guard was prepared for them.

As master of ceremony I was really impressed by all the finalists, as I am sure the whole audience was. I certainly did not envy the judges, because the standard of each and every one of the finalists was so high, it was almost impossible to choose a winner.

The tension mounted, and after the excitement of the final catwalk by all the contestants, the judges scores had been tabulated & together with the 60% student vote, a new Mr & Ms Monash were named.

The new Mr & Ms Monash took their victory walk to thunderous applause from the audience and it was time for the final performer of the night.

LET’S GET THIS PARTY STARTED

Now it was time for me to hand the reigns over to DJ Silent. His console was set up on stage, & it was time for him to rock the roof off, as the Monash Ball  – A Midsummer Night’s Dream was still in full swing, and the night was still young. 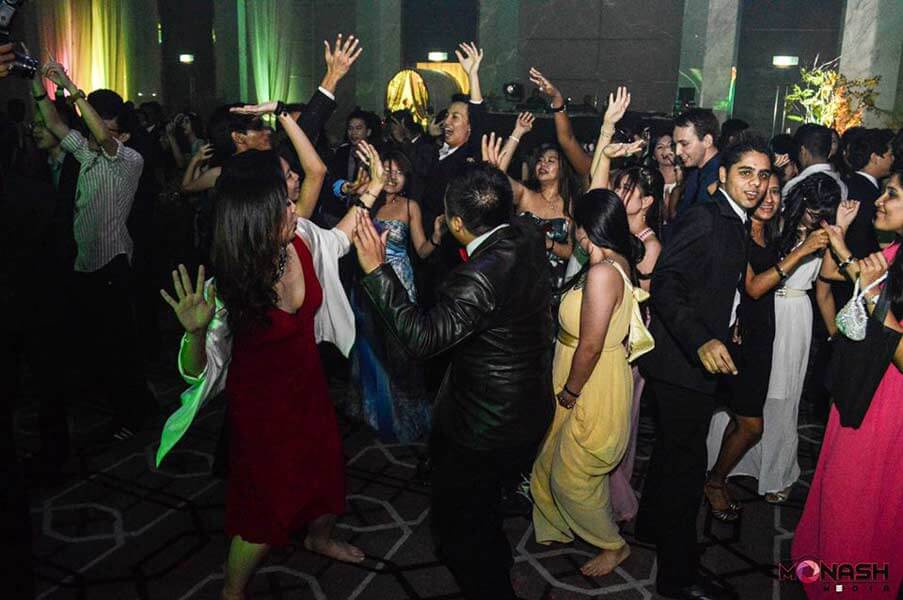 I really want to thank Jas Dang & his team of Monash University Students – as master of ceremony it’s rare indeed to encounter such a helpful & enthusiastic committee. They left no stone unturned and they deserve all the accolades for organising such a wonderful night. Also a big thank you to Rohit, from Hitman Solutions – kudo’s to you & your team as well.

I’m sure it will be a Midsummer Night’s Dream that will be remembered for a long, long, time.