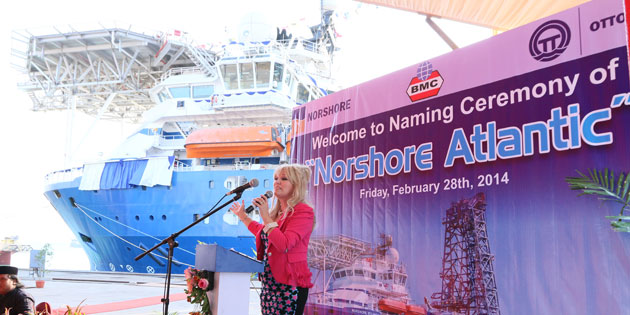 Master of Ceremonies for the Naming Ceremony of Norshore Atlantic

When I was chosen to be the master of ceremonies for the naming ceremony of a special vessel like the Norshore Atlantic I definitely knew it would be a very special and unique engagement.

First of all, the company hired their own charter boat to ferry across all their VIP guests & staff, and I, as the master of ceremonies, together with my crew, set sail earlier, as we needed time to set up for the event. 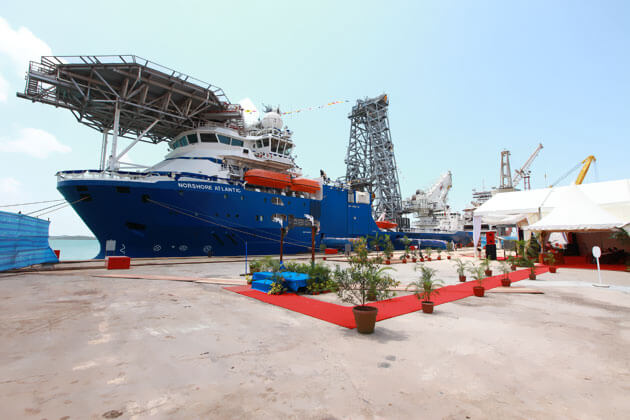 The companies involved – Otto Marine Limited  & Norshore Management had taken over the Batamec shipyard where the vessel had gone through many ups and downs in the building process, as it is an extremely specialized ship & many things that the client asked the shipyard to do were firsts, so there was obviously at lot of hardships that they had to overcome to get the Norshore Atlantic up and running.

By 2.30pm all the press and VIP guest had arrived, and they were treated to a lovely welcome of cool towels, drinks & beautiful Indonesian girls dressed in traditional attire kindly pinned corsages on all the ladies.

The guests were from all around the world, and as they lined up to sign the guest book, they were also treated to the auspicious Lion Dance. All guests also received a special gift of a Laser cut paper weight with the vessel engraved on the inside as a special momento of the event.

As the master of ceremonies, I kicked off the event 3pm, after which, the bosses gave a welcoming speech, and a few selected VIP’s plus the press were then asked to board the vessel for a tour. The rest of the guests were treated to cocktails & a band played lovely music while they mixed, mingled & networked. 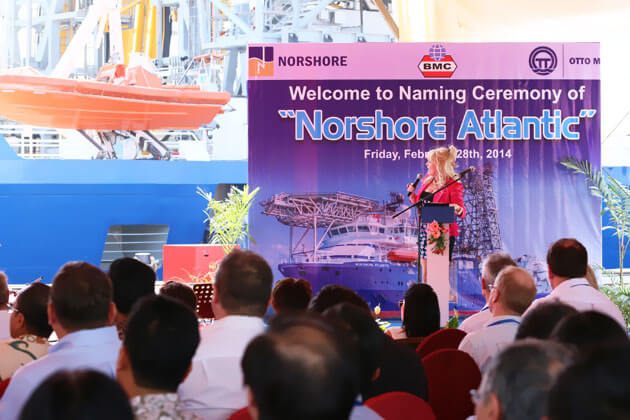 By 5pm all guest had returned and it was time for the big moment.

Firstly, as master of ceremonies I was asked to introduce some traditional Indonesian musicians, accompanied by some beautiful traditional dancers. Then it was time for the most important part of the event. As master of ceremonies it was crucial I brought my ‘A’ game. First on the agenda were special prayers by a Pastor. After which,  I called the ‘Godmother’ of the vessel to a special red carpet which led her to a platform that had a giant ribbon she was to cut. Together with the whole audience we counted to 3 and the ‘Godmother’ cut the ribbon. This was attached to a magnum of champagne, which swung into action & smashed & broke into the vessel & thankfully everything went beautifully, and the vessel was officially christened the ‘Norshore Atlantic’.

Naturally the builders & owners were thrilled at last, that everything had been accomplished.

We welcomed the Godmother back into the tentage that had been set up, and then there was a large exchanging of gifts by all parties concerned. Some of the recipients were very emotional, and as master of ceremonies, I could really feel the pain that they must have gone through to make the Norshore Atlantic become a reality, & I was really touched.

Another tentage had been set up to cater for a buffet dinner, so after all the formalities were completed, the buffet line was officially opened & delicious food, catered by the Holiday Inn was ready. Crabs were also being barbequed outside &, they were the first foods to go!

I also must let you know, that a special wine was also made for this momentous occasion. It was especially prepared by Otto Marine Limited and had a picture of the Norshore Atlantic on the label. Many guests were very impressed, and even wanted to take a bottle home with them. 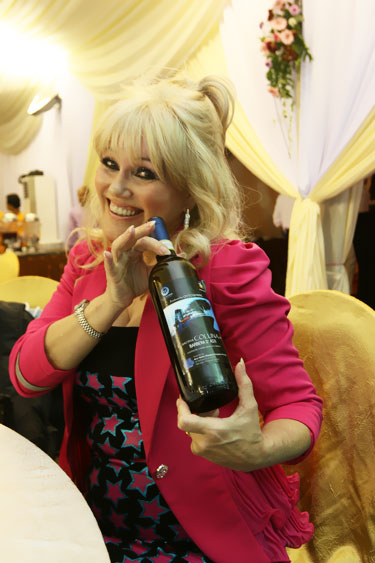 I had 10 minutes to change, and now my job also changed from master of ceremonies to party emcee for the next hour.

As the guest enjoyed their sumptuous dinner I sang, my back-up girls danced & we mingled with the crowd, getting some of the fun-loving bunch up on stage for some fun, games and audience interaction. By 7pm I was asked to finish my last song, so I sang “Firework” by Katy Perry.

FIREWORKS OVER THE BOUGH OF THE NORSHORE ATLANTIC

To cap off a spectacular day, it was time to do my duty again as master of ceremonies and invite all the guests outside. Why? Because the night was to end with a spectacular fireworks display. The fireworks soon blasted off, soaring into the night sky, bursting over the bough of the amazing Norshore Atlantic, lighting up the darkness with twinkles and sparkle, and filling everyone’s hearts with joy on this incredibly special, magical day.

By 7.30pm it was time for all guests to start making their way back to the buses for the journey back to the ferry terminal.

To cap off the journey, the entourage was given a full police escort all the way to the ferry. We were all whisked through customs & we were soon all aboard the chartered ferry that brought the 200 of us back safely to Singapore. Of course, the companies involved – Otto Marine Limited and Norshore Management AS were still treating everyone like royalty and we were all given water & cashew nuts, or pistachio’s or peanuts to munch on while the ferry was sailing back to Harbourfront Singapore.

We docked at 11pm Singapore time & as master of ceremonies for this very unique event, I was so happy, thrilled & excited for all those involved, because it was an immense success & despite the massive amount of work & logistics involved, everything went off without a hitch. 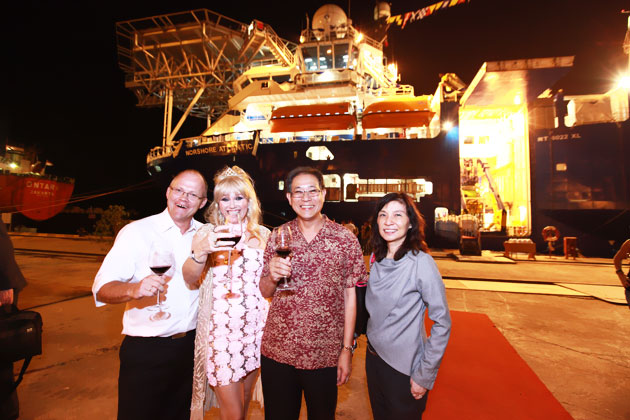 I must really thank all the hard-working people involved , especially May Ching, Pei Pei, Wani & Michael & their incredible teams, who definitely had many sleepless nights. Congratulations on a magnificent job – now it’s time for you all to have a blissful nights’ sleep.