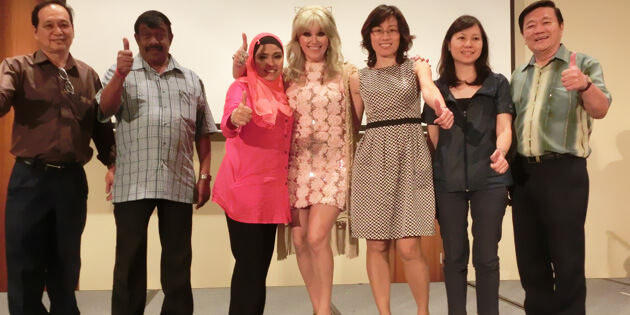 It was terrific being selected as the Singapore emcee for the NUS Faculty of Engineering dinner and dance party.

A large committee were in charge of organising this very important annual function for the faculty, and it is a night that everyone looks forward to.

This year, they decided to choose me as their Singapore emcee, and as always, I find it a great honour when people put their faith and trust in me and my amazing team. 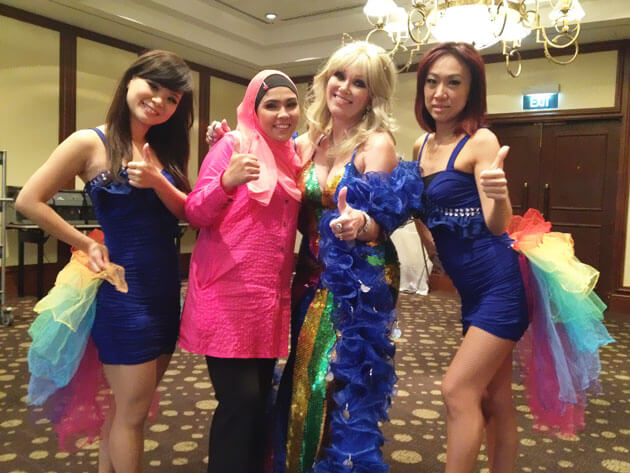 Their theme for this year was ‘Festival of Colours’ as they wanted to give their guests the chance to come in their most colourful outfits, yet still be chic and glamorous if they felt like it.

ALL GUESTS ARRIVE ON TIME

Being their Singapore emcee, I always enjoy seeing the guests arrive, and the energy starts building with anticipation and excitement for the night that is about to unfold. The NUS guests didn’t disappoint!

In fact, a point that I have to note is, all the guests were on time, and in fact, a lot of them were early, which, in my years of experience as a Singapore d&d emcee, I find this quite rare. A lot of the time, guest like to arrive ‘fashionably late’.

Naturally, as the Singapore emcee, when I opened the event, I was dressed as colourfully as possible, and with an audience of 300 people, who were not just colourfully dressed, but who also had colourful personalities, the night was off to a roaring start.

The dean of the faculty gave a lovely speech, after which he made a heartfelt birthday wish to a retired faculty member who was present and seated at the VIP table. It seems that he still comes to NUS and offers his services, even though he’s retired. 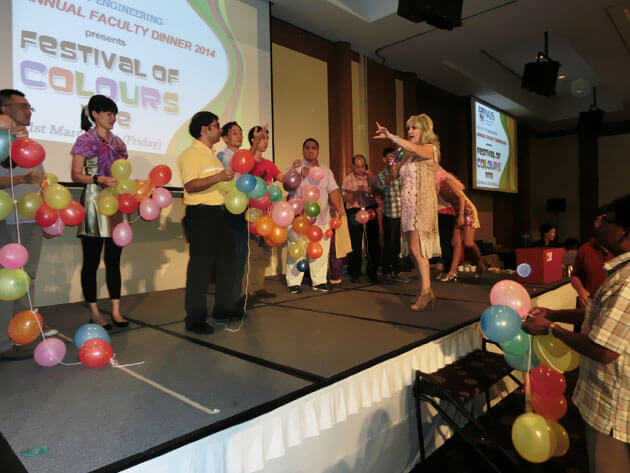 As the night progressed for me as the Singapore emcee, I somehow thought that most of the 300 people present, they were all Singaporeans, but I soon found out that wasn’t so. When the audience came on stage to participate in the fun and games, I found out that we had guests from China, India, Myanmar, Malaysia, Australia & a few other countries as well. As the Singapore MC, this always makes it interesting and exciting for me, because I love it when we have people from many different cultures.

I tried to keep most of the games for all the audience to participate, using all kinds of props, but of course balloons were a must, as a Singapore emcee with this type of theme, I wanted to keep the room as colourful as possible.

LUCKY DRAWS ARE A HIT

There were 80 lucky draws for the night & I have to take my hat off to Rachel and the organising committee, because to buy, wrap & transport 80 prizes, I know, as a Singapore emcee, that this is no an easy task. 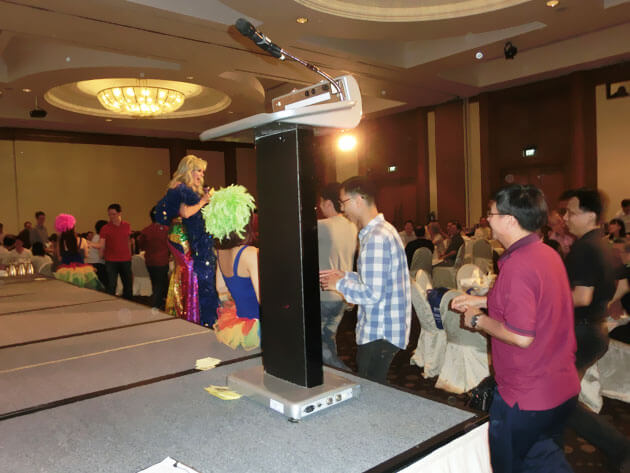 Nevertheless, because of the hard work of the committee, the audience were thrilled there were so many prizes to be given away on the night, and they were really looking forward to winning them. One of the prizes that stood out to me was a grandstand ticket to the F1 race. The boys were really happy when I announced this prize.

So, being a dinner and emcee, it was such a pleasure working with the NUS Faculty of engineering, and their hard working organising committee, who, despite their own jobs, make a lot of sacrifices, and go out of their way to ensure a wonderfully colourful exciting night for their guests.

Let me personally thank Mr Das and his team, especially Yanti, because as a Singapore emcee, I know that this is often a loveless job. If everything goes well, people rarely thank you, but if anything goes wrong, then the complaints can come think and fast.

Well done guys, you did an outstanding job, and for you this year, I’m sure that the accolades and compliments will be lavished upon you.