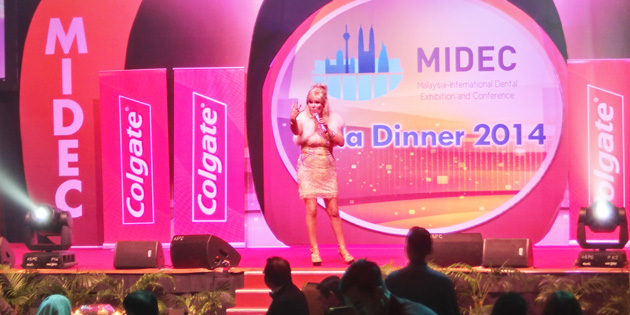 As a female emcee, I love it when I’m able to do a show where I get to interact with a profession that really takes care of us.

The MIDEC gala dinner was held on the 2nd night of a 3 day conference/exhibition for dentist, and it was really well organised, with many big names and brands participating.

The gala dinner was a dream come true for a female emcee. I got to interact with the audience and the guests were so nice. They came from far and wide for this event, with participants even flying in from countries as far away as Scotland and Brazil. 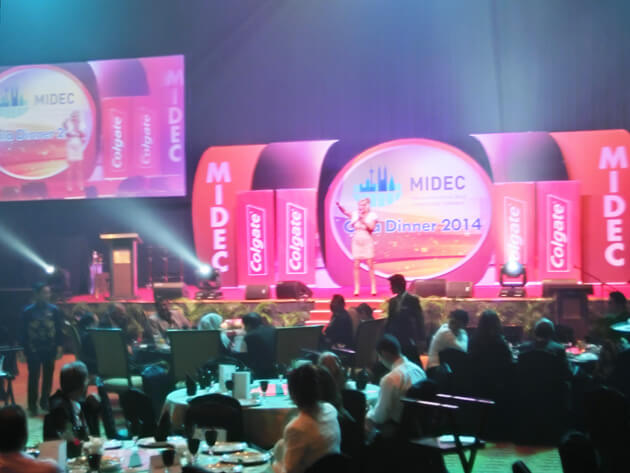 The whole evening commenced with me, as the female emcee, announcing the arrival of the Guest of Honour, VIP’s, and special entourage. The guests all stood and welcomed them, as they walked the ‘Red Carpet’ to their special tables.

As this was a gala dinner for MIDEC, as the female emcee I did not need to play any games, however, there was entertainment galore.

The whole event opened with a fabulous dance theatre troupe, which consisted of 8 dancers. They performed a rather unusual, avant garde style dance, which was very well received by the audience.

THE PASSING OF THE CHAIN

My role, as the female emcee, was to officiate the passing of the chain to the next President for the year 2014/2015. This is a great honour, and I could see that both the presidents, past & new, take this role very seriously. They each called up all their committee members who have either taken, or will take on roles to help out the presidents.

The past president presented his outgoing committee with tokens of appreciation for all their hard work & efforts. The incoming president welcomed his committee with open arms & a photography session.

Then, as the female emcee, I introduced a lovely singer by the name of Joy Victor. She was accompanied on stage by her piano player, who sounded like a 3 piece band. His name was Daniel, and he also did a duet with Joy. Joy did 2 sets and she sang many inspirational songs, which I really enjoyed listening to as the female emcee.

Once the formalities were over, it was time for the audience to let their hair down, and that’s when I really kicked into gear as the female emcee Singapore. First off was part 1 of the lucky draw, and then it was time for me and my great team of back-up dancers and DJ/VJ to do our “Showtime”. Now I was no longer the female emcee, I was the performer. I upped the tempo with a modern song and dance number and then did a lot of audience interaction and even some comedy bits here and there.

I managed to get three wonderful guys to come on stage, and for me, as the show host I felt they were really sporting. They were all dentists, but they were so playful, with amazing senses of humour, so it made my job really easy. One of the guys was a real stand-out performer, and even brought the audience to their feet with a standing ovation.

The finale of the night was the Grand Lucky Draw with three lucky winners walking away with the top prizes.

As the conference and convention were still continuing the next day, as the female emcee I was asked to make sure the night ended promptly and on time. Luckily we managed to keep to schedule, and the guest of honour was able to take her leave graciously.

It was a real pleasure to be the MC for this event, & I must thank Ju Ang and her team from the event company “Concept Squared”. The whole team did an amazing job of putting a very sophisticated, yet fun & entertaining event together.