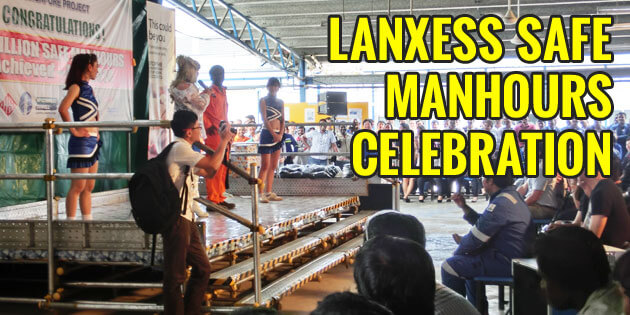 How much fun can a Singapore female emcee have with 1500 foreign workers…..Too Much!

Singapore Emcee, Donna entertain them to the max

This was my 2nd time hosting as the Singapore emcee for the Lanxess –Foster Wheeler event.

The whole party was a celebration, congratulating all the foreign workers on achieving 3 million safe manhours on their PBR NdBR Singapore project & as their Singapore female emcee, it was my job to say ‘thank you’ for all their hard work & efforts, and also to reinforce the safety message.

The foreign workers came from all around the world. India, Thailand, China, Philippines, Myanmar, Malaysia, Bangladesh & many other countries as well. It’s not often that as a Singapore female emcee that I get to perform for all the wonderful people who come to Singapore to do jobs like this.

The event was held in the canteen of the Lanxess premises & it was a grand set-up. All the workers started assembling around 9.45am & as the Singapore emcee, I kicked off the event at 10am.

I was together with my 2 beautiful dancers, and the workers were thrilled to have 3 pretty girls performing for them.

Next up, it was time for all the bosses to say ‘thank you’ to the workers & also reiterate the safety first theme. The bosses were extremely delighted, because, as the emcee, I insisted my dancers escort them onto the stage & off the stage once their speech was over. The bosses loved it & waited patiently for the girls to arrive.

One very impressive moment for me as the show host was when the last boss spoke. He delivered his speech in English, & then personally translated it into Thai, Bengali, Mandarin & Tamil – Wow! We had translators doing this for the other bosses, but Carsten really went the extra mile. Naturally all the workers were thrilled with his efforts & gave him thunderous applause.

Then it was time for me, as the Singapore emcee to start the fun & games, and despite the heat, boy did we have fun. The guys were so cute & even if they couldn’t speak English well, we all communicated with body language. There were many questions on safety at the job site, with multiple choice answers, and all the workers did brilliantly in answering them correctly.

Also, another one of my roles as the master of ceremonies was to give away awards to the manufacturers, and also the company was kindly rewarding their workers by giving away 21 fabulous prizes in the lucky draw. There were Samsung galaxy handphones, Samsung galaxy notes & smart TV’s being given away.

As the workers still had to work for the rest of the day, as the MC, I had to stick strictly to timing and make sure that the final closing speech by the boss started at 12.05pm. He was really happy with their 3 million safe manhours, as this company really value their workers & educate them really well, asking them to take care & really look out for each other.

As one of the bosses touchingly put it earlier in his speech, they put their lives on the line every day. One wrong move & it could not only impact them in a horrible way, but also the people they are working with.

As the female celebrity emcee, we sang our closing thank you song to all the bosses and workers at 12.10pm and then it was time for all of them to be rewarded with a scrumptious buffet lunch.

They very kindly asked us to join them as well for the yummy delicious food which we did, and promised us that if they can achieve 5 million safe manhours, they want me back again as their host. Thanks guys, be safe, because we’d love to be back!