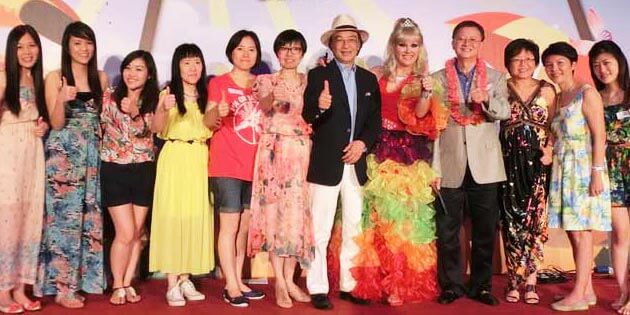 To be chosen as the emcee Singapore for the Tricor Regional Executive Seminar Gala Dinner was a great thrill for me.

The Tricor party was made up of executives like chartered accountants and lawyers, managers and above, who provide their services to many of the fortune 500 companies. So can you imagine how delighted I was to be their emcee Singapore for their ‘Tropical Paradise’ gala.

They hold this seminar bi-annually, and this year Singapore was proud to be the host country & I was honoured to be their female emcee Singapore. The theme ‘Tropical Paradise’ was chosen as the committee felt that this best represented the beautiful island of Singapore. 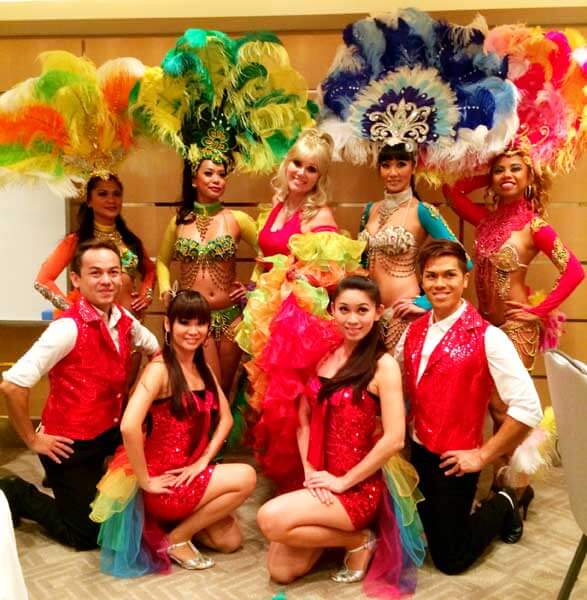 WELCOME TO THE TROPICS

As the emcee Singapore, the night ‘kicked off’ with a real ‘fiesta’ feel – hot, sexy, spicy samba dancers. They paraded all their feathers and finery while sambaing to the tune ‘Copacabana’, which as the emcee Singapore I felt was amazingly appropriate, especially as it was the height of ‘World Cup’ fever as well.

Then it was my turn to say hi and as the gala dinner emcee, welcome everyone to our tropical shores.

The guests had already been having a whale of a time with the pre-event activities so my job as the corporate emcee was to keep the energy pulsating from there. 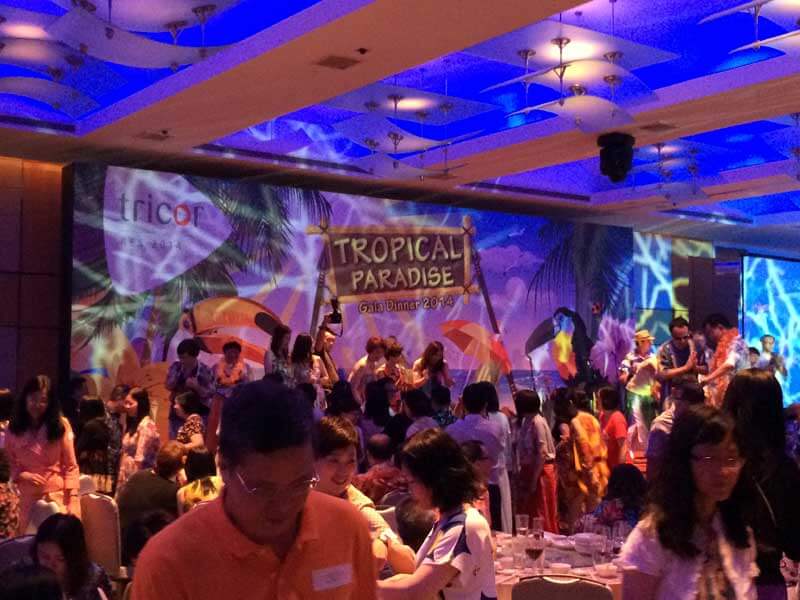 After my emcee warm-up game, it was time for some delicious food, and while they were enjoying their sumptuous meal, they were serenaded by a terrific three piece band, who played all the tropical themed songs, plus some oldies & goldies.

FUN IN THE SUN

I really adore hosting for events where the guests come from all around the world. Firstly, they’re very excited to see each other again after two years, and secondly, they love meeting up in foreign countries, not just for their seminar and gala, but so that they also have a little time to be tourists in an exotic location as well. 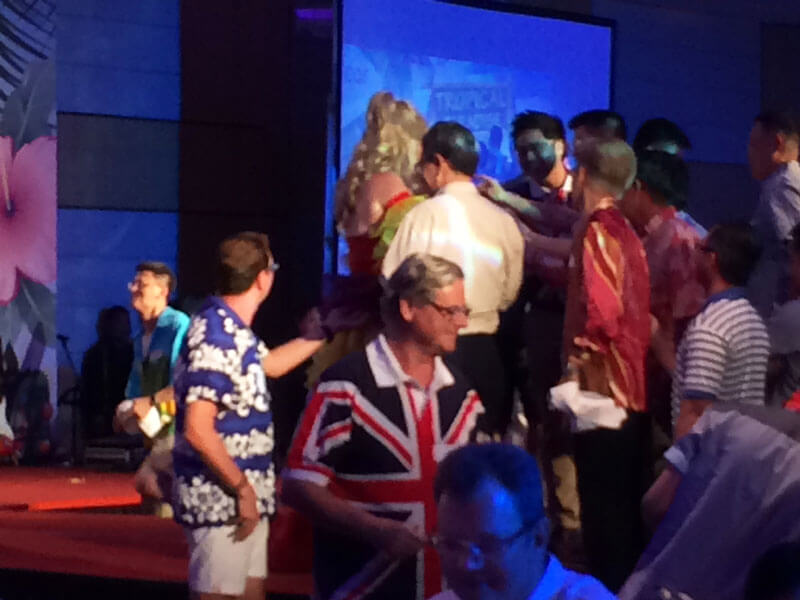 Tricor really wanted to have ‘fun in the sun’ in Singapore and were super enthusiastic when it came time for the games on stage. I would say 70% of the audience were ladies, and as an emcee in Singapore, I know these girls will be a ‘ticklish’ bunch, which in turn will inspire the men to be more hilarious, because they have such a responsive audience!

As one of the emcees in Singapore, I know this is definitely one of the highlights of the gala dinner. However, I had my reservations as to whether the guests would come dressed for the theme or not, as they may not have space in their luggage to accommodate costumes.

Boy was I wrong! They came dressed to the theme in their tropical best! Some even in hula skirts and coconuts, but from what I could see as the emcee Singapore, almost everyone came dressed in something tropical. Flowers were everywhere, and it was a very colourful audience indeed.

Something unusual for me this time was, those who wanted to enter the best dressed competition had to register themselves, and they could enter as an individual or a group. So, as the emcee Singapore, I was given a list of 9 contestants, which actually consisted of about 16 -20 people, as some of them were groups of 3 or 5.

"Dinner and Dance Emcee" by @DonnaDaniels of DonnaDaniels.com for Tricor Group

It was an extremely exciting competition as we had a T-shaped stage, and the contestants had a built in ‘catwalk’ at their disposal.

All good things must come to an end, I was obliged to wrap up the night, as our very lively guest still had an important seminar to attend the next morning.

It was a fabulous night, and the head of the committee from Hong Kong personally thanked me, and as the professional emcee in Singapore, I am extremely grateful that they really enjoyed themselves.

It was an incredible effort by the event company “Ivox”, who managed to ‘turn around’ the ballroom and have all the pre-event up and running, and a huge stage set-up & audio and visual in place in 90 minutes. Plus they still had to carry on after the party to get the next day organised for the whole seminar. Hats off to you guys, give yourselves a pat on the back! Well done!