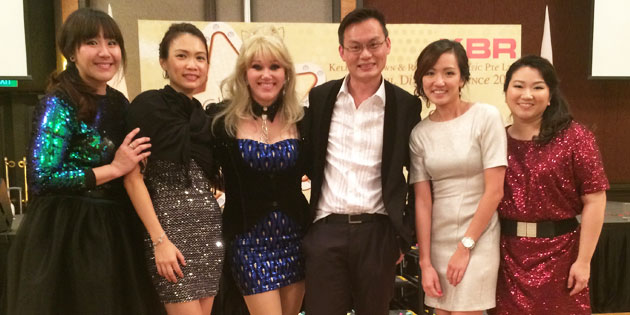 As a Singapore female emcee, I’m really amazed how gracious, considerate & generous clients can be.

I just hosted the Kellogg Brown & Root Asia Pacific Glitz & Glam night & they were so kind, giving me, as the female emcee, delicious wine, nets cards with cash, a power bank &…. I still got paid – lol!

It was a very thrilling night, held at the Orchard Hotel and I think the client was particularly excited as this was their first time using a Singapore female emcee. 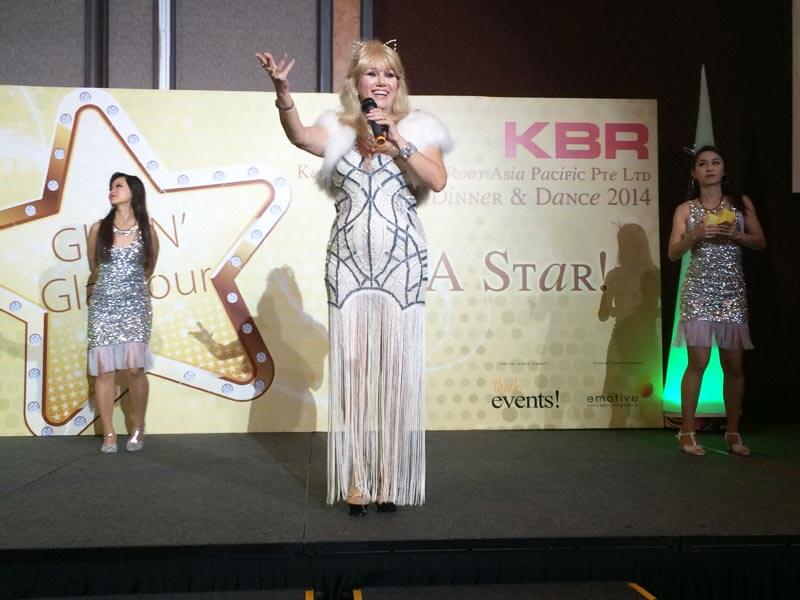 I don’t know if it’s my imagination, but as a Singapore female emcee I’m beginning to see a trend. More and more clients are turning towards using professional female emcee’s and the audiences are loving it. And guess what? I’m loving it too!

I think this was Kellogg Brown & Root Asia Pacific’s 15th time holding a dinner and dance for their staff and invited guests, and when I went for the pre-event meeting with the committee, I could see they were really dedicated and hardworking. Even though they obviously had their full time work load, the committee really sacrificed their time to organize and ensure that an exciting program was on the cards for the night. 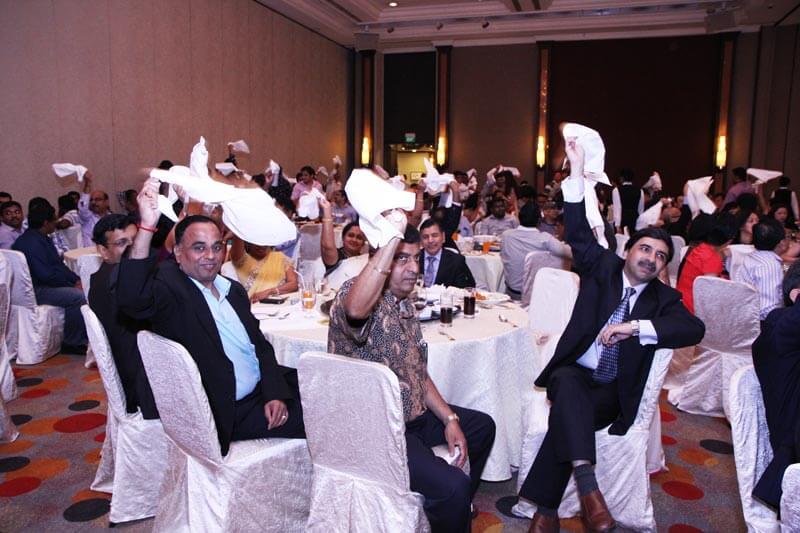 As the Singapore female dinner and dance emcee, I opened the show with a song & dance with my two lovely dancers and then they rushed to the ballrooms doors where they proceeded to lead a procession of guys and gals into the ballroom. I could see that this was quite a shock for the audience, until they realised it was none other than their Senior Management team.

They were so cute – they came dancing through the doors, into the ballroom and onto the stage carrying plates of……..Cupcakes! Yep, you saw correctly. They were so sweet, they wanted to make sure all their guest got a sweet treat from them – also signifying how much the management team appreciated and applauded their staff’s efforts. Then, as the Singapore female show host, I announced what the special treats were all about, & the audience went crazy with gratitude & appreciation for what the management team had done. So, well done Kellogg Brown & Root Asia Pacific. 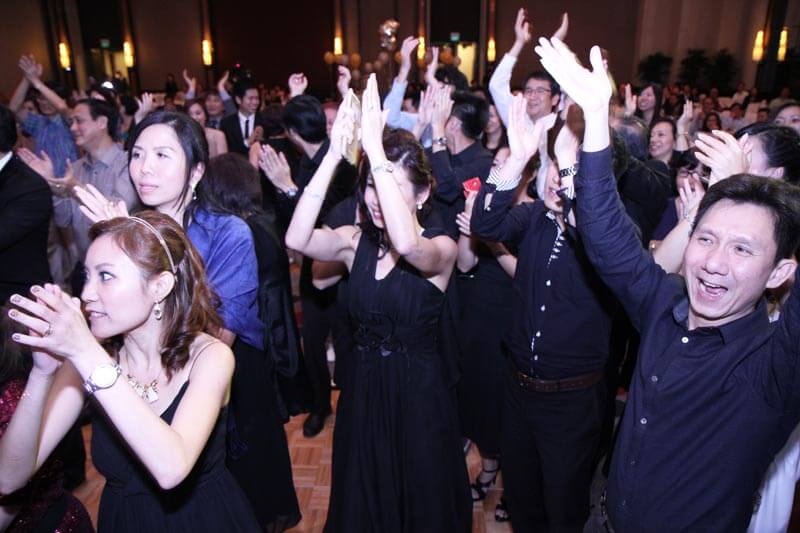 Music For All Races

After all the speeches, formalities and long service awards were over, it was time to announce their delicious dinner would be served.

As a special treat, the organising committee had arranged for a band – they call themselves Kairi – to perform for their listening and dining pleasure.

These guys were very talented, and as the staff and guests from Kellogg Brown and Root Asia Pacific were from all over the world, the band showed their versatility by singing songs for everyone.

I was really happy that we got to take quite a long break while the band were playing, as this gave me, as the Singapore female event emcee, enough time to do a costume change.

I always think that the audience love it when a professional female emcee changes, especially when the theme is Glitz & Glam, because it gives me a chance to showcase beautiful costumes, which the audience definitely enjoy.

Fun And Games Galore for a Dinner and Dance 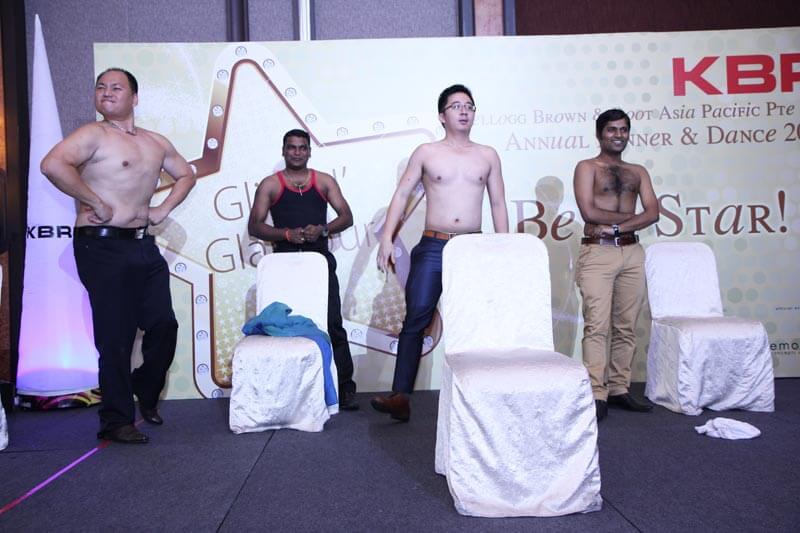 Once the band completed their first set, it was time for me to bring the party to life. This was not a problem. Kellogg Brown and Root Asia Pacific were such a fun loving bunch, the games were enthusiastically received by all and in fact, we even had to turn people away – so many wanted to participate in the games.

Naturally the audience were excited for the lucky draws and with the kind of prizes Kellogg Brown & Root Asia Pacific were giving away, they weren’t disappointed.

Then, as the female mc, I invited the band back onstage for their 2nd set of the night, and we also had one more chance to change dresses. So I managed to do 3 costume changes for this show. This is quite unusual, as I normally don’t have enough time to take the necessary breaks to do this.

One of the unusual highlights for the Kellogg Brown & Root Asia Pacific Glitz and Glam night, for me, as the Singapore female emcee, was to host a separate draw to the lucky draw, and that was a separate Midnight Draw. A different ticket stub was issued just for this draw, so only those remaining late into the night would be present for this, so, that means that these people had a better chance of winning.

I rounded of the Grand Lucky Draw at 11.45pm and then started disco dancing time. At 12.30pm I gathered all those left in the ballroom to the dance floor area. Even though it was late, there were still a lot of people dancing and partying the night away and as a show host I feel really happy when I see the audience enjoying themselves and the night is such a success.

There were 11 more wonderful prizes to give away, & then there was still more partying until 1am. Phew….what a fun night!

Kudo’s to Jacqueline and her hard working team from Emotive Concepts Singapore, they did an amazing set-up and gave me and all my team, a tremendous amount of help. Really appreciate your hard work guys…..