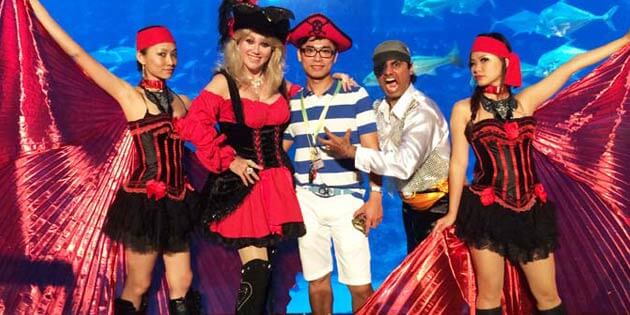 As an event emcee, it’s really fantastic when the theme matches the venue. How’s this for spectacular – being the Singapore emcee at the SEA Aquarium & hosting a ‘Pirate’ Themed party.

It was so fun – as the professional event emcee for Keller Singapore I got to dress up in my best pirate duds & have all kinds of exotic fish swimming in the giant aquarium behind me.

Whenever I’ve worked this venue as the Singapore female emcee, I find this ‘living backdrop’ mesmerising & the audience definitely felt the same way. 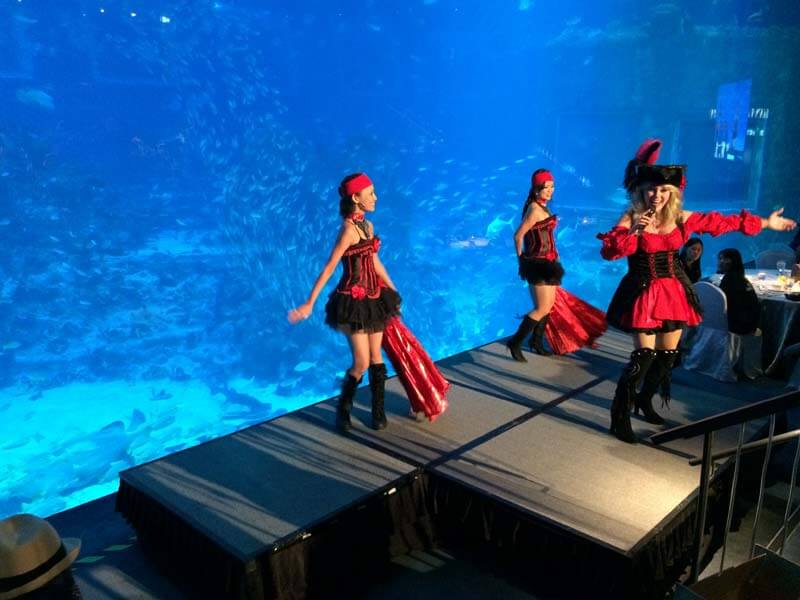 It was a lovely family affair & it’s always heart-warming for an event emcee to see so many guests bring their family with them & have such a good time together.

The committee had done a terrific job, & I was very impressed with the décor – there were little treasure chests full of gold chocolate coins on every table, with pearls & other assorted gems spilling out.

We set sail on the ‘Jolly Roger’ pirate ship – not the ‘Black Pearl’ as there were a lot of small children that would have been scared of a ‘Johnny Depp’ feel. So, as the Singapore emcee, even though I was asked to bring the pirate theme to life – it was a really jolly pirate ship.

Naturally there was lots of rum & feasting, that as the event emcee I could see the audience loved. But what really touched my heart as a Singapore emcee were the long service awards. There were 3 recipients, and each one had 2 special videos prepared for them. One was by their boss & the other by their family. And then one of their children came on stage with them to present a lovely bouquet of flowers to them. For me, as a Singapore celebrity emcee, this was a very touching moment.

There was also a special video prepared by the committee to showcase the company history & projects and all the exciting activities held throughout the year – very enlightening for me to watch.

HIGHLIGHTS  OF THE NIGHT

I would have to say that one of the highlights of the night was the best dressed competition, with many children vying for the special prize.

However, the real highlight of the night, had to be the Dnd Lucky Draw.

As the event emcee, I invited the VIP to draw the 5th & 4th prizes, which he did, and then draw 3 more lucky winners. These people were the top 3 potential winners, but…..which prize would they win? This was to be determined by a Pirate Pole dance!

Well it was hilariously funny, I laughed my head off, & naturally it was hotly contested with the top prizes to be won on the line. The audience had the power, and the deciding vote was in their hands.

Well, all good things must come to an end, so I, brought the Jolly Roger back into port, as the sweet little fishes (and some big sharks & stingrays too) wanted the lights turned off so they could go to sleep J

Many thanks to all the hardworking committee & the behind the scenes people at RWS for an amazing night & a job well done.