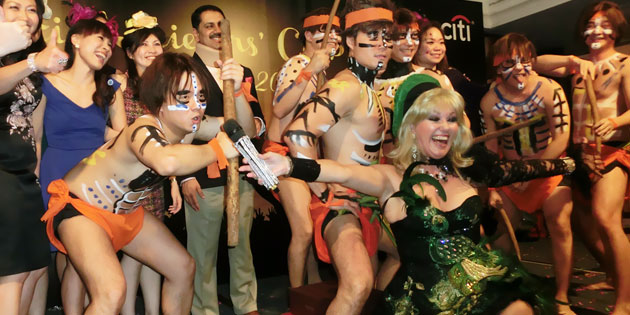 As an Australian corporate emcee living in Singapore it’s really a treat to get invited to host an Aussie themed event. Citi Achievers Club hold their exciting Awards night in April every year, and this year their theme was ‘A Day At The Races’. The reason why they chose me as their corporate emcee is because they wanted me to bring the flavour of the Australian Melbourne Cup to their event. The incentive for their staff this year was to make it to Melbourne & the winners are definitely looking forward to their fantastic trip.

Naturally with the thought of going to the Melbourne Cup, many guests dressed to the nines, because the Melbourne Cup is an exciting event in the Aussie calendar, where participants take their dressing very seriously. The can come dressed to impress, with even top hat & tails, or they could be in the wildest, weirdest, wackiest clothes & hat. All styles add to the colour & flavour of the day. So for my ‘Day at the Races’ for the Citi Achievers Club, as their corporate emcee, I chose to go a bit wild & wacky, with a feathered dress & hat that was an the 18th green of a gold course. Definitely worthy of Melbourne Cup Race Day. 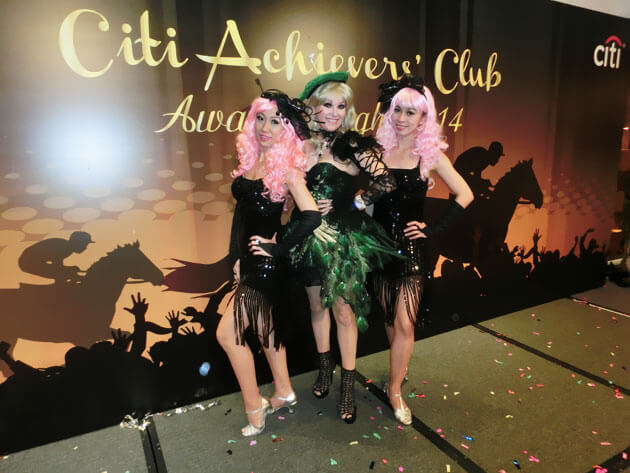 My role, as the corporate emcee was to bring the fun, excitement & flavour of race day, but also, a really important part of the night was to recognize the incredible award winners. Citi Achievers Club are the cream of the crop, the crème de la crème of the banking, insurance & sales staff of Citibank, and from the very start of the night, the award recipients were lined up outside the ballroom & given a standing ovation as they marched into the room. The guest really wanted to celebrate the amazing achievements of the winners and when it was time for me, as the corporate emcee to announce their names, the guests celebrated by exploding confetti canons in the air, and making sure that all the award recipients received beautiful bouquets of flowers. The whole ballroom smelt like lilies and roses. We really could have been at the Melbourne Cup! 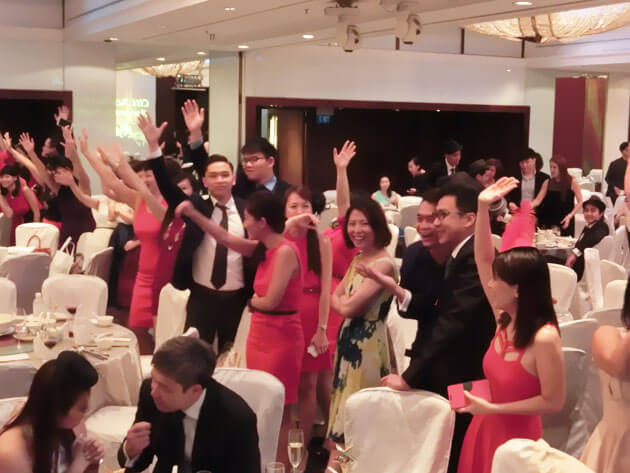 Australians are known for their laid back style, so as the Aussie corporate emcee, I kept all the games really fun & light hearted, but all still had an Australian flavour. I think one of the highlights was our own little Melbourne Cup Horse Race. This was done by the bosses, who were really sporting & wanting to contribute to the fun of the theme & especially ensure that all the award winners & guests had a great time. For myself, as a Singapore corporate emcee, this is always very heart-warming to see, because people recognize that if the team works together, everyone succeeds. 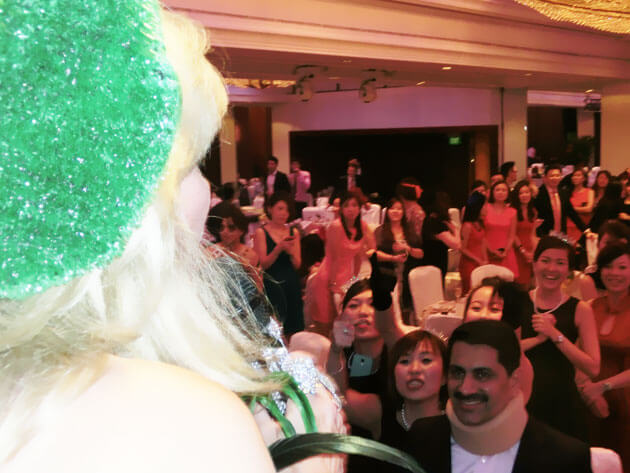 One of the most playful times of the night occurred when the Branches were trying to win the Best Dressed Team. Citi Achievers go all out to engage all their staff in their branch to play along for the night. Their motto – ‘work hard, play hard’, and there were three shortlisted branches that did an amazing job of dressing up for a ‘Day at the Races’. However, there was one outstanding team that really impressed me as the corporate emcee. They dressed up as Aborigines, complete with bare bodies, face paint, and didgeridoos!

They put on a really comical sketch, with a translator & of course, the girls from the branch were also on hand to play their part in the revelry. So, no prizes here for guessing which branch walked away with the top prize. Even the individual ‘Best Dressed’ contestants were outstanding. This, for me, as the Citi Achievers Club corporate emcee will go down as one of my most memorable shows, as the theme was so close to my heart, and the audience were really grateful that I could bring the ‘true blue’, ‘fair dinkum’ Aussie flavour & immerse them in the excitement of the Melbourne Cup.

A BIG thank you to Janice, Jennifer, Leonard and the hard working team for organizing such a great night.

Fill out the form below to speak with someone from our team or you can call +65 91448777.
<div class='gf_browser_chrome gform_wrapper popmake-8759_wrapper gform_legacy